Skip to content
HomeSell Electrical SurplusWHAT DOES A TRANSFORMER DO? 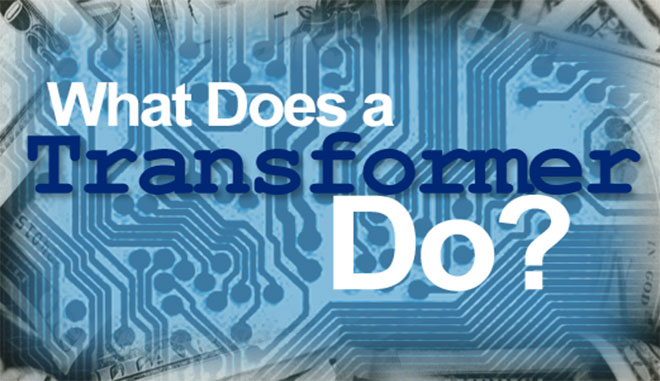 It may pass in a rare conversation about electronics but the workings of a transformers aren’t quite as discussed as the word itself. What goes on in a transformer? What does it actually do? It’s actually quite handy and much more common than you think.

A transformer usually consists of two coils wrapped around a core capable of magnetic permeability. Silicon steel or iron make up this core, while the coils are usually copper or aluminum wires coated with a thin layer of insulation. This combination wire of metal and insulation is often referred to as magnet wire or enameled wire. The two coils are referred to as the primary coil and the secondary coil.

The basic function of the transformer is to convert the incoming power to a different output power. Basically, it pumps up the voltage that goes out of the transformer. To do so, a varying current will go through the primary coil and create a varying magnetic flux in the core. This magnetic flux in the core will induce a varying magnetic field through the secondary winding and create an electromotive force—otherwise known as EMF. Electromotive force is the voltage generated by the magnetic force within the transformer. The higher voltage allows energy to be transmitted more easily over long distances at a low current.

Each transformer is based on two principles. The first is that an electric current runs through the primary coil to create the necessary magnetic field. The second is that a varying magnetic field exists in the secondary coil, which creates a voltage across the ends of that coil. Even though each transformer is based on these principles, they still have a wide range of possible designs and sizes that accomplish the same thing. A transformer can be small enough to fit into a microphone, or it can weigh several tons.

In extremely simplified terms, a transformer takes an electric current and, through electromagnetism, boosts the voltage that comes out of the transformer so it can go longer distance more easily and cheaply. Of course, there is much more to a transformer than that and plenty more complicated words that require a dictionary, but that is the cut down definition and workings of a transformer. Transformers are complicated, but they do something simple for us: they transmit energy over longer distances than would otherwise be possible at the same cost of materials. They aren’t just handy, they’re money-savers.